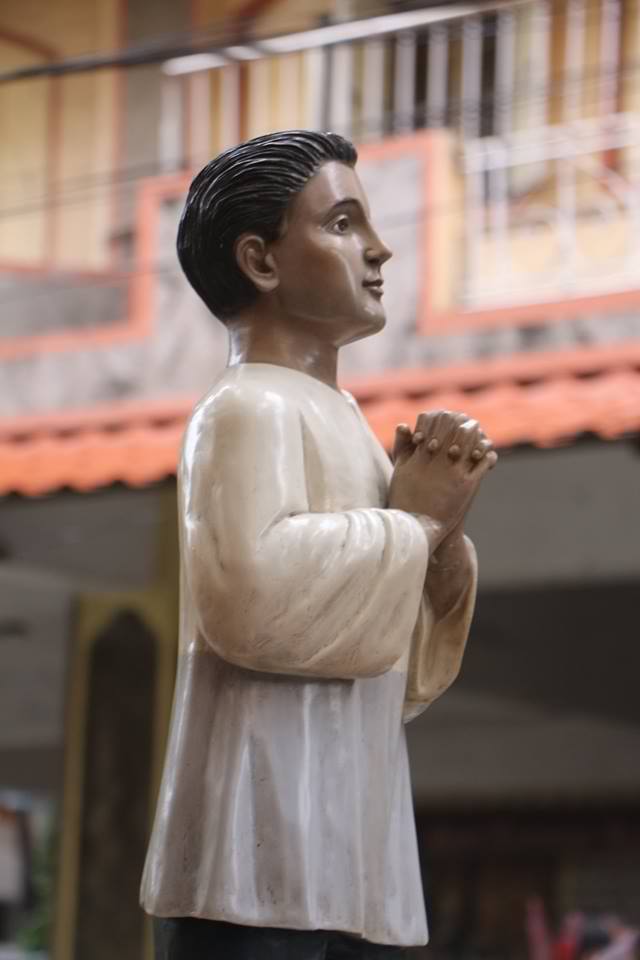 Lorenzo Ruiz was a simple man who lived a very simple life. No definite date can be given as to when he was born because the baptismal records of Binondo were burned during World War II like other available documents written about him. Thus, most of the information found were based on historical facts and on data as narrated and/or written by the Dominican Fathers, the religious order whom he was associated with. Historians believed that he was born sometime between 1600 and 1610 and was baptized as a Roman Catholic in the Dominican Church, the only one existing in Binondo then. There is little information about Lorenzo’s parents except that his father was a Chinese trader and his mother was a Malayan-Filipino. Lorenzo’s parents were married, lived in Binondo and had Christian formation in the church established by the Dominican Fathers. So, Lorenzo was brought up in a religious, peaceful and meaningful Christian atmosphere.

According to Fr. Diego Rodriguez, when Lorenzo was a boy, he served as an errand and altar boy in the church and convent in Binondo. He lived with the Dominican Fathers in the convent where he had a very good education and easy access to books printed by the fathers themselves. As he matured, his lay apostolate was thru his full membership in the Confraternity of the Holy Rosary, a brotherhood of men and women established by the Dominicans in the Philippines in 1587. Its aim was to promote devotion to the Virgin Mary through recitation of the rosary, procession along the streets of Binondo, and frequent reception of the sacraments. At an unknown date, Lorenzo got married and had two sons and a daughter. There was nothing written about his family except information from.

Fr. Juan Peguero who wrote a history of the Dominicans in the Philippines where he stated that Lorenzo’s wife survived him by 53 years.

In 1636, when Lorenzo was in his late twenties or early thirties, he was allegedly sought by the authorities “on account of a homicide which he witnessed and for which he was blamed” as affirmed by Fr. Diego Rodriguez and Fr. Domingo Gonzalez. Fr. Juan Lopez also said that Lorenzo “was followed by the agents of the law in order to answer for his crimes.”

Afraid that he would be given a death sentence, Lorenzo sought the advice and protection of the Dominican Fathers in Binondo. The priests referred his case to Fr. Domingo Gonzalez, the Provincial Superior and the Prior of the Sto. Domingo convent in Intramuros since 1632. Having presided the meeting of the Confraternity, he knew Lorenzo very well and was convinced of his innocence. He arranged for Lorenzo’s escape through the Commissary of the Holy Office of the Inquisition for which Fr. Gonzalez was personally handling the transportation of four priests and a lay man bound for Japan to minister and assist the dying Japanese Christian Church. Lorenzo was told to leave with them. This plan was kept in complete secrecy because the Spanish authorities were not in good terms with the Church. On June 10, 1636, the group including Lorenzo, sailed off. Only when they were at sea did Lorenzo find out that they were bound for Japan.

Japan was a Forbidden City especially to Christian missionaries and other religious. In the early 16th century, the Japanese ruler, Tokugawa Yeyasu, a Buddhist, feared that the Christian missionaries were advance parties of Spain and Portugal to conquer Japan. Thus, on January 27, 1614, he issued a Decree of General Persecution Against Christians ordering Christians to renounce their faith. He stressed that disobedience would mean death. Accordingly, Lorenzo and his companions were detected as religious because of their chaste behavior and patience. In Nagazaki, they were arrested, put to trial and when asked to renounce his faith in exchange for his life, Lorenzo’s final stand was : “That I will never do, because I am a Christian and I shall die for God, and for Him I will give many thousands of lives if I had them. And so, do with me as you please.” With these words, on September 27, Lorenzo and four others were sentenced to die and suffered three kinds of torture : the water torture, torment of the needles and hanging on the pit.

It took no less than 350 years for Lorenzo Ruiz to be officially acknowledged by the Church and placed in the Register of Saints – from 1638 when Fr. Domingo Gonzalez wrote a detailed narrative of the martyrdom until 1977 when the General Chapter of the Dominican Order recommended to their Superior General to make representations to the Holy See for the prompt expedition of the Beatification Cause. Finally and with much exaltation, on February 18, 1981 at the Luneta Park, Lorenzo and 15 martyrs were declared by Pope John Paul II as Blessed before the Church. A month after the beatification, a Decree of the Sacred Congregation for the Sacraments and the Divine Worship granted the petition that September 27 be the yearly feast day of Blessed Lorenzo and his companions. This was later changed to September 28.

From then on Eucharistic celebrations, prayers and devotions were said in honor of Blessed Lorenzo, asking for his intercession. With reports of petitions answered, particularly a miraculous cure of a young girl, Blessed Lorenzo Ruiz and his Companion Martyrs were solemnly canonized at St. Peter’s Square, Rome by Pope John Paul II on October 18, 1987.

It is the pride and joy of every Filipino and every Ruizian to emulate and imitate our first Filipino saint, a sacristan, escribano, cofrade, family man, a MARTYR – St Lorenzo Ruiz de Manila. He was a brave lay, Catholic Filipino who stood by his faith. He was a true model of communion – he did not choose separation from God to save his life but chose unity with God even if it meant losing his life. This was his measure of service and generosity and his sanctity was the peak of his excellence.